Here are the files on those reindeer who are applying to be on the team this year. Lots of diversity, which I for one think is a good thing...up to a point.

Ever since Rudolph, we've been getting a lot more applicants who are--in one way or another--different, unusual, or unconventional. But, let's face it: not everyone can have something as useful as a luminous nose, and while I admire their spirit and tenacity...well, see for yourself: 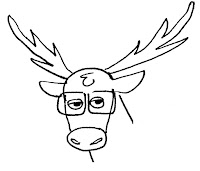 Crispin is a fine specimen, physically. Very fit with tremendous stamina, both traits we look for in a deer. His only real problem is that he's legally blind at night. And, while I know we do our best to be accommodating...I mean, it's very much a night job, pulling the sleigh. I might recommend him for a training position. Something that takes place during daylight hours. 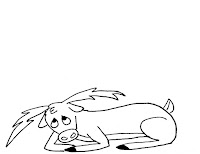 She's really very keen, and she even went to school with Comet, and he's vouched for her work ethic. But she's absolutely terrified of heights. She's pretty confident that she can overcome this fear, if it means pulling the sleigh, but we had to do the interview outside because she was afraid to climb the steps to get inside, so I have my concerns.

STAN AND OLIVIA THE TWO-HEADED REINDEER(S) 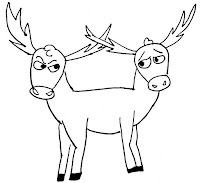 In many ways, I can see where having a two-headed reindeer on the team could be a positive thing. But, this is a team and Stan and Olivia do not work well together. They spent most of the interview bickering over which one was the front and which one was the back, and whenever they turn their heads to face one another, their antlers get tangled. Hard pass. 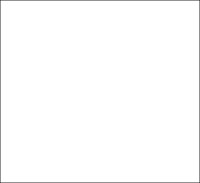 He pointed out that what you do requires stealth, and he's got a point. But I think you have to weight the advantages against the downsides. And, considering the fact that I literally lost him three times during the interview, I'm convinced that the cons outweigh the pros with this one.

I mean...well, it's in the name, really, isn't it? I just don't think a very-nearly-dead reindeer is going to be able to pull the sleigh without...what? Oh. Oh, I see.

And, I've just been informed that his condition has changed. He is no longer very nearly dead...So...yeah, probably best if we just move on. 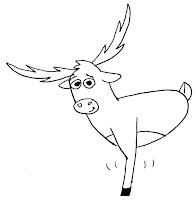 I want the record to show that I am not ableist. I would have no qualms whatever about hiring a three-legged reindeer. I could even see us hiring a two-legged reindeer, providing they were able to keep up with the requirements of the job. But I think, if we're being honest, we can all agree that one leg is just plain not enough.

And then, of course, we have all the usual Rudolph copycats. They don't seem to understand that it takes more than a red nose to be part of the team. They seem to think all they need to get a song written about them is an oddly colored body part. So, this year, we had:

He doesn't have any kind of enhanced hearing or anything. His ears are just very, very blue.

Fairly sure she used paint.

She just...she just has brown eyes. That's not even a thing.

So, yeah. There ya go. Nice enough guys, but I just don't think there's room for them on the team.

Posted by Templeton Moss at 7:27 PM