WHEN A PIG FLEW at Storyberries 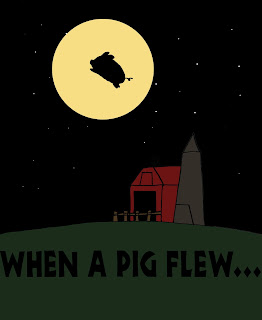 When people say “When pigs fly” what they really mean is “never” because, as we all know, pigs cannot fly. But the next time someone tells you something will only happen “when pigs fly,” you might want to inform them that this has already happened, and tell them all about Tracey.

Tracey was a pig. And like many other pigs, she had her hopes and dreams and ambitions. Her greatest dream was to fly. All her life she had watched the birds flying overhead and wondered what it must be like. She even tried flying herself. She climbed up onto a bale of hay and jumped, but that didn’t work. She tried running and jumping into the wind, but that didn’t work. Once she even persuaded a flock of geese to try lifting her up off the ground….that one didn’t really go well for anyone involved.

She was just about ready to give up, which would have made this story very short but easy to tell, when an old sheep who knew about stuff said, “If you want to fly, why not visit the Spirit of the Woods?”

“Oh, you know, the thousand acre forest of dense trees just outside the farm. Over there, see?”

Tracey looked and, indeed, there was an enormous forest just outside the farm. Funny how she’d never noticed it before.

And what happened to Tracey in the woods? Did she ever get to fly? Are there or are there not any monkeys in this story? The answer to these and other questions can be found by reading the full story HERE (And, yes, there are monkeys).
Posted by Templeton Moss at 10:20 AM No comments:

LEROY MAKES A FRIEND at Storyberries

One day, while walking down a busy street, Leroy the penguin happened to see something he never expected to see here in the big city: another penguin! He had been quite used to seeing penguins when he was living in Antarctica, but now he lived in Chicago and he hadn’t seen a penguin in months. 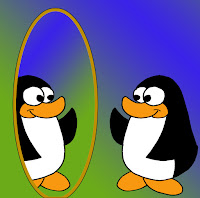 To find out what happens to Leroy and his new "friend," visit Storyberries HERE and read the full story.
Posted by Templeton Moss at 10:15 AM No comments:

The King died, which is sad. But when a king dies, there isn't much time to be too sad because of needing to find a new king to take his place. Normally, that's the king's son, the prince, except this particular king made a slight mistake and died before managing to have any sons. Or daughters, for that matter. Which meant that not only was the king dead, but there was nobody to take his place.

The Chancellor (sort of like the king's assistant) went to the Court Wizard and asked him what was to be done. Unfortunately, the Court Wizard, whose name was Roy, was a fraud. He could no more do magic than an elephant could take up ballet. He'd been faking it for years with simple tricks and illusions and hoping that the day would never come when anyone would need any real magic from him. Now that the day had come, Roy was in trouble.

“I'll need to consult the High Council Of Spirits,” he said. “Go away and come back tomorrow.”

The Chancellor did go away and come back tomorrow, by which time the Court Wizard had come up with something that he thought would pass muster.

“I have consulted the High Council of Spirits,” he said, “and they have delivered to me this prophecy.” So saying, he unfurled a scroll on which he had written nonsense chicken scratch which he pretended was a foreign language only he could understand and recited the following poem:

“Red of hair and blue of eyes,
Never speaks in any tone,
Always stuffed but never eats.
This is the one who must sit on the throne.
And if, a fortnight from this day,
A person like this cannot be found,
Then the person who delivered these words
Is the one who must be given the crown.”

As poems go, it was pretty terrible, but the message was clear. The next ruler of the kingdom would be someone with red hair and blue eyes who never spoke or ate but was, somehow, always “stuffed.” And if someone like that could not be found in a fortnight (that's two weeks) the Wizard himself would have to be made king...which, of course, was the Wizard's plan all along. He figured they'd never find someone like that, so he'd be crowned instead.


Will the Evil not-really-a-wizard succeed in his cunning plan? Find out HERE.
Posted by Templeton Moss at 10:12 AM No comments: