Once Upon a time there were three little pigs. Their names were Manny, Moe and Mack. And one day, they all left home to make their own way in the world and they each built themselves a house.

Manny's house was made of straw.

Moe's house was made of sticks.

And, of course, Mack's house was built of...gingerbread.

That was not the original plan, of course, but the hardware store was completely out of bricks so he went to the candy store next door and got gingerbread instead (it was on sale).

Everything was fine for a few weeks, but then the Big Bad Wolf came into town. He heard about the three pigs living in three houses in the woods (because, let's face it, that's not something you see every day) and figured this was his chance for a three-course ham dinner.

The Wolf knocked on Manny's front door (it's not easy to knock on a door made of straw, by the way) and said, “Little pig, little pig, let me come in!”

“Not by the hair of my chinny-chin-chin!” said Manny. Which baffled the Wolf, of course, but only because he'd never spent much time around pigs. If he had, he would have known that this was a very common expression in the pig community, with a long and fascinating etymology for which we do not have time in this story.

The point is that, though the “chinny-chin-chin” bit was confusing, he understood the “not” part and said, “Then I'll huff and I'll puff and I'll blow your house in!”

The Wolf took a very deep breath and blew down the straw house. It collapsed all around Manny who ran screaming to the home of his brother, Moe.

“Little pigs, little pigs,” said the Wolf after pounding on Moe's door (much easier, as it was made of wood rather than straw), “let me come in!”

“Not by the hair of our chinny-chin-chins!”

Well, the whole “chinny-chin-chin” thing was started to irritate the Wolf and he said, “Then I'll huff and I'll puff and I'll blow your house in!”

And, just like Manny's straw house, Moe's stick house soon collapsed. Manny and Moe ran for Mack's house and the Wolf gave chase. Fortunately, he tripped on a pile of fallen sticks, so Manny and Moe had a good head start. 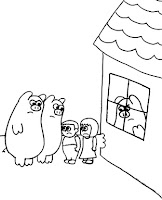 Imagine their surprise and confusion, however, upon arriving at Mack's house and seeing two small children eating it.

“My name is Gretel,” said the girl. “And this is my brother Hansel.”

Mack, burst out the front door and saw his brothers and the two children standing there. Then he saw the holes in his wall Hansel and Gretel had eaten.

“What's going on here?” he demanded.


­
But by then the Wolf had appeared in the distance and there wasn't time. He ushered everyone inside and bolted the door.

“Now,” he said once they were all inside. “Will someone please explain this to me?”

So, Hansel and Gretel told Mack the Pig about how their family was very poor and had no food to eat. The two children had gone out into the woods to find some food, and had left a trail of breadcrumbs behind to find their way home. Then they found that birds had eaten their breadcrumbs, and they were hopelessly lost in the woods. That's when they came upon the gingerbread house, which was the first food they'd seen in a long time and, well, they couldn't resist and started eating it.

“We're sorry that we ate holes in our house, Mr. Pig,” said Hansel.

“Yeah,” added Manny, “I wasn't going to say anything, but what were you thinking? A gingerbread house? And that's coming from a guy who built his house out of hay!”

“Okay! Okay!” Mack was getting a little annoyed by all this talk.

“Not by the hair of our chinny-chin-chins!” said Manny, Moe and Mack all at the same time.

“What does that mean?” asked Hansel.

“Then I'll huff and I'll puff and I'll blow your house in!” said the Wolf and they heard him inhale deeply.

“Why bother blowing the house down? It's made of gingerbread! Just eat your way in.”

“Are you out of your mind?” said Moe.

“Trust me,” said Mack to his brothers.

The Wolf realized that Mack was right. It would be much easier to eat his way through the house than to blow it down. So he began to eat the gingerbread house.

He ate the gingerbread walls, the candy cane trim, the peanut brittle shingles, the cupcake doorknobs, the sheet cake shutters, the gumdrop décor, until finally the Three Little Pigs, Hansel and Gretel were standing in an empty lot surrounded by a few sticks of furniture and facing the terrifying wolf.

“No,” said the Wolf, with a pained expression on his face. “No, I'm not. After eating all those sweets, I don't feel very well. And I certainly don't have any appetite anymore. In fact, I think I might have diabetes now. Excuse me, I'm going to go check into a hospital.” And the Wolf left the Pigs and the Kids alone.

So, apparently, Mack wasn't quite so stupid as everyone thought for building a gingerbread house. I mean, he was a bit stupid, but not as stupid as...never mind. It's a happy ending, let's not ruin it.

Hansel and Gretel's father found them and explained that the reason there had been no food in the house was that he hadn't had a chance to go grocery shopping that week. They had sort of overreacted, but it all worked out okay.

As for the Three Little Pigs, they decided that the three of them could build a better house if they worked together and, by now, the hardware store had bricks in stock once again and they were able to build a beautiful, sturdy and wolf-proof home they could all share.

Oh, and the Big Bad Wolf? Well, after he was released from the hospital he resolved to be a bit more careful with what he ate, and ultimately decided to leave the pigs alone.

So, you see, everyone lived happily ever after.

Did you enjoy this silly story? Would you like to read more fairy tale mashups? Then order you copy of Tairy Fales today. Find out what happens when Snow White meets the Three Bears, when Cinderella finds a magic lamp, when a man no bigger than a thumb falls in love with a girl with long, long hair and other ridiculous things in this adorable little book of pure silliness.
Posted by Templeton Moss at 12:48 AM