Well, first of all, it's not an epic mistake made by Brooklyn Nine-Nine star, Terry Crews. That would be "Terry Fails," and that's something different.

No, what we're talking about are "Tairy Fales." An exciting new innovation in fairy tale technology from your friends at Galleons Lap (which, I guess, is pretty much just me).

Tairy Fales are fairy tale mashups. To make one, just take two fairy tales and mix and match the characters, situations and other elements to create a new fairy tale. Ready? Let's try it!

Take a story like 'Snow White and the Seven Dwarfs.' We all know the story, right? Snow White's wicked stepmother asks her huntsman to kill Snow White so that she, the stepmother, can be the fairest in the land. The huntsman doesn't have the heart to kill the princess, so she runs into the woods.

What does she find?

Well, normally, when this story is told, she finds a cottage where seven dwarfs live. But what if she found something different? Maybe somebody else's cottage. Now, what's another story about someone in the woods finding someone's cottage? How about 'Goldilocks and the Three Bears?' 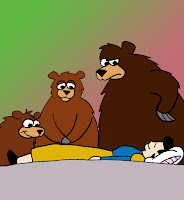 So, now, what do we have? Snow White, fleeing the wrath of her wicked stepmother, stumbles upon a cottage owned by a Poppa Bear, a Momma Bear and a Baby Bear!

What happens next? Well, you'll just have to read the book to find out!

To learn more about this innovative and original take on classic fairy tales, pick up your copy of TAIRY FALES today.
Posted by Templeton Moss at 1:58 PM