Enjoy this free sneak preview of the latest Galleons Lap book, 'Boots,' based on the fairy tale "Puss In Boots"  by Charles Perrault.


It all began, as these things so often do, with something very small. Sometimes it’s a pebble rolling down a mountain. Sometimes it’s a butterfly landing on the butt of a guy who’s sunbathing facedown. This time it was a hole in the fence. Not a big hole. Just a sort of crack at the bottom. A gap between two boards slightly bigger than the gaps between the other boards. Something most people probably wouldn’t even notice.

But it was enough for the cat to get out.

If you were to ask the humans who fed this cat in exchange for the pleasure of his company (they would describe themselves as his “owners,” but what do they know?) they would tell you that their faithful and obedient cat never left their yard. They would have been thoroughly shocked to discover that their cat was neither faithful nor particularly obedient and did, in fact, leave the yard through the hole in the fence pretty much every night.

What do cats do when they go out at night? All sorts of things. Sometimes they look for food. Sometimes they chase birds or mice. Sometimes they just prowl around looking cool, perhaps remembering a time when they were not so different from lions and tigers. But most of the time they’re looking for love.

Well, maybe not “love” in the sense that we use the word. In their case, the urge is less romantic and more…let’s say “primal.” In any case, this is supposed to be a kids’ book, so let’s just say that the cat—the one that got out through the whole in the fence and whose name history does not relate so let’s call him “Tom” to make things easier—went out at night to spend time with female cats before going home to his yard where his delusional owners were convinced he stayed every night.

One of the myriad female cats that Tom would spend his evenings with was the beloved, purebred pet of a Wealthy Woman who was just as clueless about her cat’s nighttime activities as Tom’s owners were about his. In fact, had she known that her perfect, elegant, immaculately groomed Puss (which is what we’re calling her for the purposes of our story) was involved in an assignation with a mangy beast like Tom, she would have been shocked.

But whether she wanted to believe it or not, the evidence was undeniable. After a few weeks of increased appetite, lethargy and barfing, the Wealthy Woman was forced to call the Veterinarian who came ‘round at once and declared, “Puss is going to have kittens!”

The usual number of months later, Puss did, indeed, give birth to a litter of six kittens. Five of them were the image of their mother, with barely any trace off their ne’er-do-well father in them. This pleased the Wealthy Woman as she was mainly concerned with the way things looked. The sixth kitten however was, in this woman’s opinion, horrible to behold.

He looked almost exactly like his father, that is he was a tabby cat, orange fur with white patches. In fact, he had four white patches on each of his paws, which rather made him look like he had on shoes of some kind. But his feet weren’t the only reason the Wealthy Woman disliked him.

The kitten was disfigured. His left ear hadn’t quite finished growing and was short and shriveled. This is what it looked like: 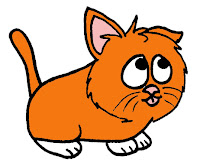 "How horrible!" cried the Wealthy Woman.

"What?" said the Vet, who, of course, had come to deliver the kittens. "He's not so ugly."

“Not so ugly? Are you blind! Look at that horrible ear of his! And he looks like a mangy alley cat. He’s a freak!” And she called for one of her servants to take the kitten to the well and drown him.

“Well I’ll not have that thing living under my roof!”

Any way you look at it, she wasn’t a very nice lady, but that’s okay because she won’t be in the story much longer.

“Then I’ll take him. I’m sure I can find someone to give him a good home.”

“If you must,” said the Wealthy Woman.

The Vet walked back to his house with the newborn kitten in his arms. Of course, he would’ve been happy to look after the cat himself. But he was so busy taking care of other people’s pets he didn’t have time to keep one himself. But he was confident that, when he got to his own village, he’d find someone willing to adopt the kitten.

“What’s wrong with your cat?”

“Ugh! What a weird-looking thing!”

Everyone he passed saw the kitten’s misshapen ear and wrote the poor little guy off as a freak. Nobody wanted to adopt a cat who was deformed (however slightly) when there were plenty of normal-looking cats in town.

The Vet was just beginning to lose hope as he passed through the market place to pick up some milk and bread before going home. And that’s where he met Corie.

A little girl had spotted the tabby kitten and ran straight up to the Vet.

He handed the kitten to the girl. As she reached out for it, the Vet noticed a deep, red scar on her left hand, as though she had been burned and it had not healed properly.

A man’s voice called out and the girl stopped smiling at once. She turned around to face her father who was looking crossly at her. The Vet could tell at a glance that this was a successful businessman. He wore fine clothes, as did the two boys with him, who were clearly his sons.

That was the first time the Vet noticed what the little girl was wearing: It looked suspiciously like a boy’s suit that had been haphazardly resewn into a girl’s outfit. This struck the Vet as odd. If her father was so rich, why didn’t his daughter wear new clothes? Or, at least, girl clothes?

“What is that thing?” he growled at the kitten in his daughter’s arms.

“You can have him if you want him,” said the Vet. “I was trying to find someone to take care of him when I—”

“On a hat for Brian and a flute for Sean,” said Corie, defiantly. “But I haven’t gotten anything. It’s not fair!”

“Life’s not fair, girl! And you’d do well to remember that and hold your tongue in the future!”

“The kitten is free,” said the Vet. He was now determined that this girl should have this kitten. At first his only concern was for the well-being of the cat. But seeing the way this girl was treated by her father, he felt certain that she needed a companion as well.

“Free?” said the girl’s father. He grumbled to himself as he thought it over. “Fine! But it had better not be any trouble!”

“It won’t be, Father, I swear.” She turned back to the Vet. “Thank you so much for…what’s his name?”

“I get to name him?” said Corie, very excited. She took a good long look at the happy kitten in her hands. She saw his deformed ear, just like everyone else, but she thought it was cute. And then she looked at his paws. “He looks like he’s wearing little boots…That’s it! Boots!”

“Hurry up, girl!” roared the girl’s father. “Or I’m leaving you behind!”

Corie thanked the Veterinarian again and ran after her father and two brothers, who were bragging about the expensive gifts their father had bought and teasing their sister for her ugly kitten.

But Corie didn’t care that her prize hadn’t cost a single coin. To her, Boots was worth more than all the gold in the world.

And, before our story is done, he would prove himself a most valuable cat, indeed!

A Poem by Me (Templeton)

If you ever feel like nothing and you want a slice of cake,
If you worry about hedgehogs and the actions they might take,
If you think you have an oboe in your attic or your den,
If your auntie went to Denmark and she hasn’t come again,
If your name is really “Henry” but your friends all call you “Sue,”
If you can’t remember Wednesday and you don’t know what to do,
If you’re gonna run for congress or you lost your favorite wheel,
If your best friend who’s a lizard doesn’t care how tall you feel,
If there’s something weird occurring and you don't know what to say,
Remember that I love you. See? Now everything's okay.
Posted by Templeton Moss at 11:06 AM No comments: