Carol and Greg were very excited. They had bought their first house and were ready to move in. They had struggled for many years, but now they were finally ready to settle down and start their new life together. Everything was going really well, until they found the note.

Stuck to the fridge with a magnetic calendar from their realtor was a note. Stuck to the note was a post-it from said realtor which read:

“The previous owners wanted me to leave this for you. Maybe you can figure out what it means.”

The note itself read:

Welcome to your new home. We hope you will be as happy here as we were. Before you get too comfortable, though, we have one very important thing to tell you:

Ever. For any reason. Do not move it at all. If it breaks, buy a new one, but find someplace else to put it because you must not ever move the washing machine from its current location. Seriously. I know this sounds insane but, trust me, I’m being totally serious.

Carol and Greg took turns reading the note and trying to figure out what Chris was on about. The laundry room was really a sort of atrium between the kitchen and the garage. On one side was a cabinet for storing cleaning supplies, and on the other was the washer and dryer. Both of which looked perfectly normal. Not exactly state of the art, but not ancient either. And, when they did their first load of laundry, they worked fine. Neither of them understood why the previous owner had been so adamant about not moving the washing machine, but they also saw no reason why they would need to move it. So, they threw away the note and promptly forgot all about it.

Two years passed before the washing machine started giving them trouble. No matter how evenly they tried to balance the load, it rocked back and forth. The clothes came out with undissolved patches of soap powder on them. And, finally, Carol went down to move the laundry and stepped in a puddle of water in her stocking feet. It was leaking.

Greg, completely forgetting the warning from the previous owner, mopped up the water with some old towels, then prepared to move the washer so that he could find the source of the leak. There wasn’t much room in the small atrium to maneuver the large, cumbersome machine,, but soon he had pulled one side away from the wall far enough that he could get in and try to fix it…

Which is when the pig jumped out at him. 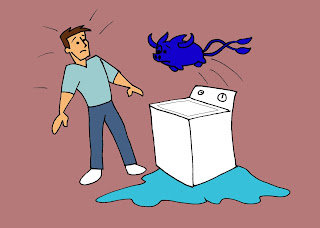 At first he didn’t realize that it was a pig. All he saw was a bluish blur jumping past his face and scrabbling frantically on the kitchen linoleum. He heard his wife scream and he ran into the kitchen, which is when he realized what it was. A blue pig, more or less, but with two long tails instead of a small, curly one and horns coming out of its head. It was squealing and running all over the downstairs, knocking things over and making a terrible mess as it did so.

Once they had regained their senses (more or less) Carol and Greg tried to catch the pig, but it was much too fast for them. Finally, after chasing it into a corner, they were able to trap it under a laundry basket, which Greg sat on to keep it from escaping.

Carol and Greg looked up to find a stranger in their home. He might have passed for a normal farmer, had he not had skin almost as blue as the pig’s.

“Mayzie,” he seemed to say to the pig, “you should be ashamed of yourself. Barging into these nice people’s home and making such a mess. Honestly,” he added to Carol and Greg, “I hope she didn’t give you too much trouble. Well, I’ll take her home now.”

Greg got up and the blue farmer picked up the now docile pig (evidently called “Mayzie”) in his arms. He then walked toward the laundry room, Carol and Greg following him closely.

Greg fixed the washing machine more quickly than any human being has ever fixed a washing machine before, pushed it back into place then, as an added precaution, bolted it to the wall so that it could never be moved again.

Neither Carol nor Greg ever spoke of this incident again for as long as they lived.
Posted by Templeton Moss at 10:23 PM