THE VOYAGES OF SINBAD THE SAILOR

Adapted from the Arabian Nights fables. 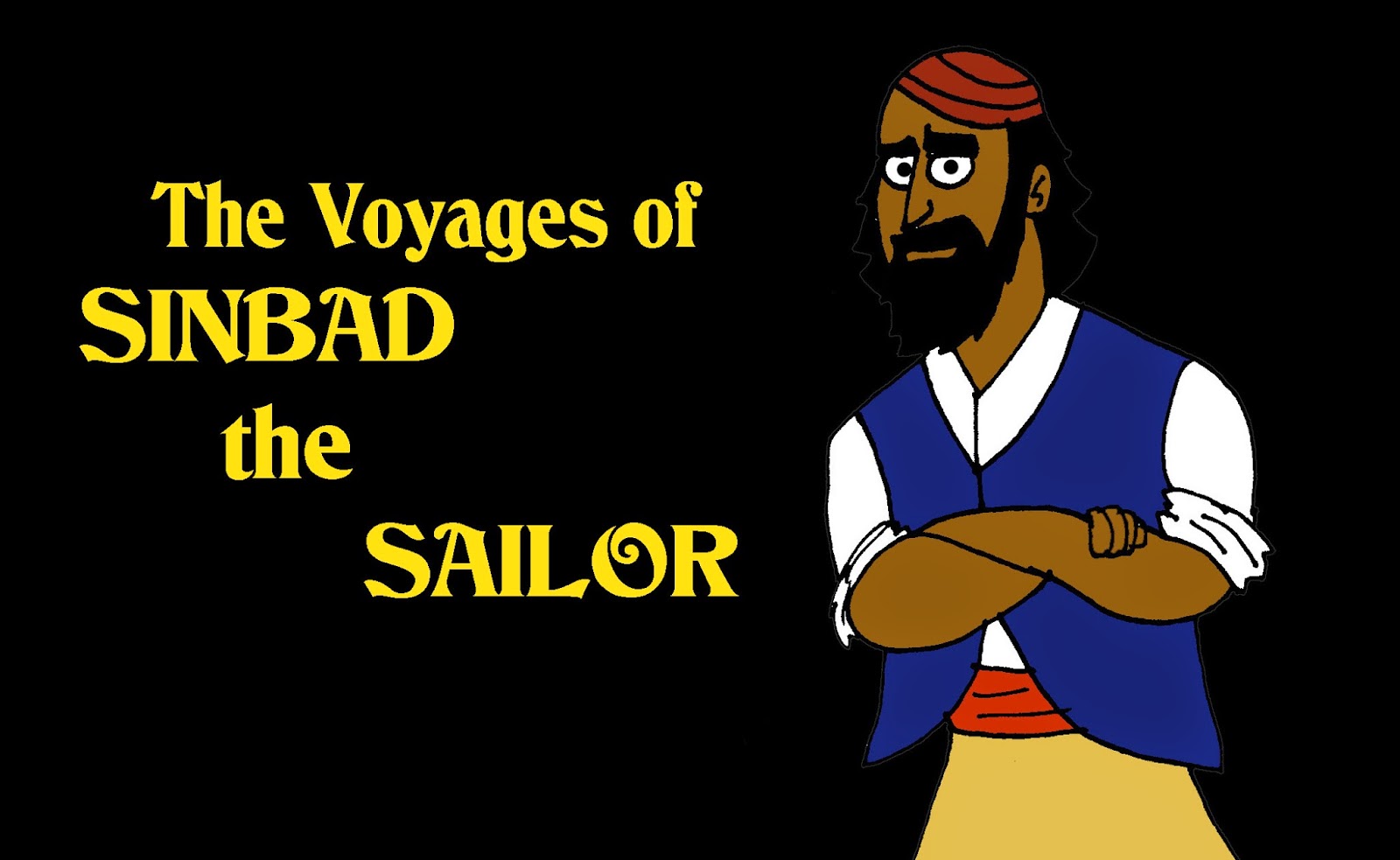 It was many, many years ago, when I was a much younger man. I was a sailor then, and had hired myself off as a crewman to a mighty vessel called...well, I don't remember. Bill or something, who knows?

The point is, there was another sailor on board that ship and at night, he would tell us all the amazing story of his adventures on the seven seas.

“I was born for the life of a sailor,” began Sinbad (for that was the sailor's name). “My father was a merchant who traded across the sea, so it was only natural that, when the time came for me to choose my vocation in life, I would become a sailor. I set out on my first voyage with great hope and excitement. We were out at sea for days without sighting land. So when the cry of ‘Land ho’ did ring out, young and foolish as I was, I dove into the sea and made for the tiny island with all my might. My fellow sailors called after me, ‘Stop! Come back, stupid!’ and similar nautical expressions but I paid them no heed and kept going until I had reached the island…

“Which, as it turned out, was not an island, but rather a giant whale which immediately began swimming away with me on his back!

“I finally managed to get away from the whale and, come nightfall, found myself alone on a desert island. I stayed there for several days, eating the fruits and herbs that grew there and drinking from a stream. I was beginning to give up hope that I would ever get home, and began to despair of ever finding my way home.

“A giant bird coming out of the sky to sit on her giant egg.

“I saw at once a chance for escape! I unraveled the turban on my head (apologizing to Allah as I did so, but desperate times call for desperate measures) and used the linen to tie myself to the bird’s leg. Soon the bird took off (no doubt to gather food for its soon-to-be-hatched offspring) and flew away with me tightly bound to her leg. I didn’t know where we were going, but I assumed, as we began to land in another country, that anyplace was better than where I just was.

“Upon untying myself from the bird I realized that she had left me on the floor of the Valley of Diamonds. Those of you who have heard the legends will know that the good thing about the Valley of Diamonds is that the floor of the valley is, of course, covered with the biggest, purest diamonds you’ll ever see. The bad thing of course is that the walls of the valley are so steep that you will never be able to climb out.

“And even if you could climb out, the rest of the country’s not exactly hospitable either. Huge serpents, birds bigger than the one that carried me, savage beasts and…the giant!

“The giant is as tall as forty men and has skin as black as pitch and only one giant eye in the middle of his face. And every night, he searches the valley for men who have climbed in looking for wealth only to find death. When he reached out his hand to grab me, I quickly filled my pack with as many diamonds as I could before he took me to his cave and dropped me into a cage with two of my countrymen, fellow travelers named Bakbarah and Alcouza.

“‘We’ve been here for two days’ said Bakbarah. ‘He keeps saying that he needs more man meat before he can cook us. Now he might have enough!’

“‘I almost hope he does,’ said Alcouza. ‘It’s worse stuck in this cage knowing what’s coming but not being able to do anything about it.’

"'How is that worse? Seriously, how is being in a cage worse than being eaten?'

“‘We can do something about it, my fellow ingredients!’ I said defiantly. ‘We can get out of this cage, attack the giant and make our escape!’

“‘Even if we could attack the giant,’ said Alcouza, ‘how can we get out of this cage? The bars are too hard for us to break through.’

“‘Not too hard for these,’ I said, opening my pack. Diamonds, of course, are the hardest things in the world, so it was no trouble to break through the bars while the giant was taking a nap. Then we went to the fire place and took a long piece of wood which was still smoldering at one end and drove it into the giant’s eye. He screamed in pain and started clawing around in blind fury, but we were long gone!

“My new companions and I ran for the seashore as fast as we could, just in case the giant was following. As luck would have it, a ship had stopped to gather provisions and happily brought us aboard. Unfortunately, our first night on the ship we ran into a terrible storm and I was, once again, cast into the sea where I spent a full day and night floating on a plank of wood before washing up on another desert island.

“But I wasn’t alone for long this time, as some very elegantly dressed men and women found me and brought me to their magnificent city of Karamesh and their great King Miraghe, who ruled over the entire island. I was welcomed by the king and soon became a favorite among his courtiers when I told the stories of my many adventures. And, when I observed that neither the king nor any of his subjects used saddles, stirrups or bridles when they rode horses, I described them to the royal craftsmen and had a complete set of riding accessories made for the king. Soon it caught on and, thanks to me, everyone in Karamesh was riding much more comfortably.

“‘Sinbad,’ said the king after a month, ‘I like you and I want you to do something for me.’

“‘Of course, your majesty, anything you want,’ I said, stupidly.

“‘I want you to marry my daughter. That way you can stay here forever and never return to your own home.’ Well, lovely though his daughter was and pleased though I was to be popular among the court, I couldn’t very well stay there forever, so I declined…the king did not take my refusal very well…he made a pointed argument in favor of my staying…I remained resolute…long story short, I soon found myself running away under cover of night.

“For a full week, I lived in the jungle, hiding during the day in case the king’s men found me and eating only what I could find. One day I heard human voices talking, and I hid in the branches of a tree until they had passed. To my surprise, however, they were not the voices of King Miraghe or his subjects, but voices I had heard before.

“‘Sinbad?’ My friends embraced me. The captain of the ship that had so recently rescued us had been searching for me ever since, and my loyal friends, who perhaps felt they owed me a debt after I helped them escape the giant, volunteered to search every island in the area until I was found. So now we were set to return to the ship and bid farewell to Karamesh once and for all.

“Which is how I come to be here among you fine men,” said Sinbad, his story at an end. “And when at last we pull into port, I am sworn never to leave home as long as I may live.” 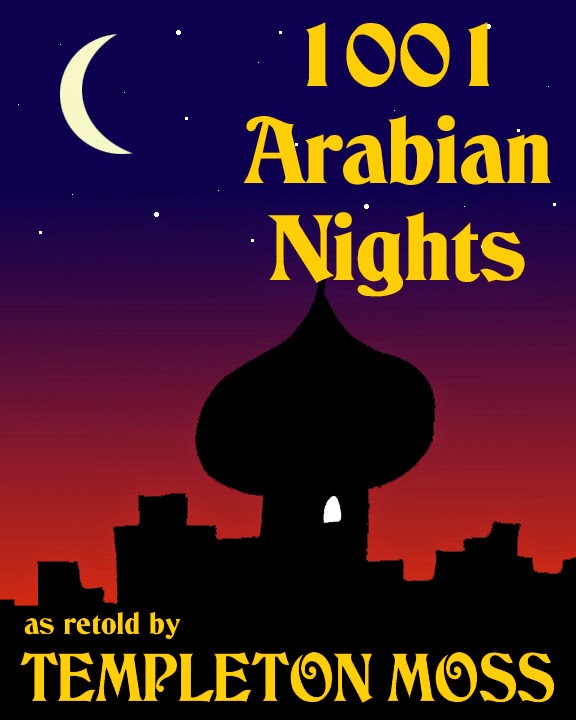 Sinbad's story is just one of many told by Scheherazade to the Sultan in the classic 1001 Arabian Nights. I have selected the best bits, taken out the long, boring, repetitive parts (which, while perfectly reasonable from an overall plot standpoint, do tend to make for some pretty tedious reading) and put them together in my own version of the book which you can purchase HERE.
Posted by Templeton Moss at 9:53 AM