THE TALE OF THE NAME OF THE TREE

Adapted from an Ancient Bantu fable


Once upon a time and long ago, there was a great famine across the valley. All the plant life withered and died, and the creatures of the valley had no more food to eat. They searched long and hard for even the tiniest scrap of food, but to no avail. It looked as though starvation would soon come to the valley.

The various creatures who lived in the valley (and they were numerous and varied—big lions and bears, little mice and lizards and everything in between, every animal you could think of) began to get worried. Some just panicked and assumed the worst would happen. Some of the bigger animals began eyeing the littler animals greedily.  Dana the Hippo went mad immediately and began trying to chew rocks until several others restrained her.

President Roosevelt (that’s Roosevelt Parrot, a big green bird who beat Lanford the Lion in the recent election; the name is a meaningless coincidence) saw that there was trouble and called an emergency town meeting so that a solution could be met. All the animals gathered at Town Hall and waited as President Roosevelt flapped over to the podium.

“My fellow citizens,” began the President, “I do not need to tell you the severity of this situation. Without fruit, vegetables, roots and herbs, we might have to go back to the old ways of Survival of the Fittest.” This comment sparked a wave of murmurs to spread through the crowd. Mostly of the “oh no, anything but that” variety, but then again there were the occasional “sounds fine to me!” followed by sideways glances at some of the smaller and more delicious animals. “Rest assured,” the President continued, “we are looking for solutions. I have several teams throughout the town searching for anything we can plant and collecting the last of the food, which we shall ration. In the meantime…well, we’re open to ideas.”

“I SAY WE PANIC!!!” shouted a chimpanzee in the back row. Without waiting for a response, he began jumping up and down, hanging from the ceiling and was chattering nonsensically under his breath when a couple of rhinos grabbed him and took him out back.

The other suggestions were not much better. Some said that research could be done with any existing fruit to genetically engineer some more. Most of the others thought that this made no sense and it was quickly discovered that the one who said it was in the wrong story, and was silenced.

Everyone was silent. All eyes turned to Oldare, the old hare who had made this wild suggestion. Nobody had even mentioned the Magic Tree for ages. It was considered a lost cause.

A legend of the valley told that, centuries ago, the Tree bore beautiful and delicious fruit which provided all the health and nutrition each animal needed, while automatically tasting like that creature’s favorite food. It would never run out of fruit for ten thousand years, and if you plucked a piece of fruit from the branch, another would instantly grow to fill its place. But the tree had been barren for some time now and the only way you could get it to bloom again…was to say its name. And nobody alive remembered the name of the Tree. This problem was addressed at the town meeting, but no practical solutions were offered with the exception of several cries from Batrick the Badger to the effect that the Tree’s name was probably “Jeff.”

“I say we chop the darn thing down and dig out the fruit ourselves,” said the beavers.

“I say we burn it. Maybe the fire will bring help,” said the rhinos.

“I say we—” began the mongooses…mongeese? Mon—never mind. Before whoever they were could finish, Oldare the Old Hare began banging his walking stick on the ground as hard as he could. Once he was sure he had their attention he spoke to the people of the town…well, I say “people” obviously they weren’t really…sorry.

Again, this was a pretty radical suggestion. Those who weren’t already convinced of it were now certain that the hare was mad as a March…well, a hare. A March hare. Everyone again began whispering and talking at once.

“Who even knows the way?”

“I don’t understand,” said Ribbit the Frog, who was young and knew little of such things. “What is the ?”

“Many leagues from this place,” began Oldare, “is .” Here he paused until the younger animals had finished giggling. They had no way of knowing that in the ancient language of the animals “Wokkawokkadoodoo” translated as “a solemn and dignified place which is to be taken very seriously and not laughed at under any circumstances.” Once the kids (and some of the more childlike adults) had quieted down, Oldare went on: “At the summit of the mountain is the . Inside the Cave lives the Spirit of All Wisdom, who speaks in the Voice of All Cleverness…or something like that. Anyway, the spirit knows everything, so if you go in, stand on the platform and say, ‘O, Great Spirit, answer my question!’ You can find out anything you want!”

“I can!” cried Fernando. Fernando was a handsome young stag who was envied and admired by the other animals of the town. In particular, he was favored among the other stags for his large and beautiful antlers, which were the envy of his kinsmen…kinsdeer…whatever. Once he had volunteered for the mission, everyone began to get on board, knowing that Fernando was loyal and true and never let anyone down. So, to tumultuous applause, Fernando ran to the .

When he arrived he did as the Old Hare said. He went inside, stood on the platform and said, “O, Great Spirit, answer my question!”

“Speak and I shall answer,” responded a beautiful voice so strong and impressive it could only be written in boldface.

“What is the name of the Magic Tree that grows in the Valley?”

There was a curious sort of silence. “What was that?” said Fernando.

“But that’s a really stupid name.”

“Hey, I just give the information, okay? Now go back to your valley and don’t forget the name!”

Without stopping to thank the Spirit, Fernando ran as fast as he could back to the village. He knew he had to go fast or else he’d never remember the name. But as he was running, he forgot to look where he was going and he came upon some low-hanging vines and his beautiful antlers got caught. He struggled hard to get free and finally did. But the struggle had so preoccupied him that he had forgotten the name of the Tree! He returned to the valley in shame.

And a new volunteer had to be selected. (“Jeff?”)

The Cheetah, Lotus Flower, knew that she could run faster than the stag and remember the name. She was the fastest cheetah in the valley, and would usually arrive somewhere well ahead of her friends just so that she could go “What took you so long?” when they caught up to her. She too ran to the , went inside, stood on the platform and said, “O, Great Spirit of Knowledge, answer my question!”

“Speak,” said the Spirit, “and I shall answer.”

“What is the name of the Magic Tree that grows in the Valley?”

So, without a word of thanks to the Spirit, Lotus Flower ran and ran as fast as she could. She saw by the position of the sun in the sky that she was making very good time. Perhaps I can afford a little break, she thought. And she curled up under an invitingly shady tree to “rest her eyes.” Resting her eyes soon became sleeping and when she awoke, she found she had completely forgotten the name. She too returned to the village a failure.

“I told you no one could do it!” said Eliza. “There’s not one animal here who can get the Name back without—”

“I know one who can,” said Oldare the Old Hare. “Someone who will save us all!”

“Not me, Tom…Him!” And Oldare, in his infinite wisdom, pointed to a turtle. This was a very small turtle with very few friends and large, horn-rimmed glasses. He was something of an outcast among his kind because he moved slowly even for a turtle. His name was Greg and he looked up when he was identified and said, simply, “Okay.” The townsfolk protested, but seeing no other alternative, allowed him to go.

Before he went, Greg went and spoke to his mother, which is usually a good idea when you’re about to embark on some manner of adventure. “How do you remember something that’s easy to forget?” asked Greg.

“Say it over and over again,” said his mother. “And don’t stop for any reason.”

So Greg set off for the at the top of Mount What-the-heck. He moved very slowly, but he knew the way. Finally after much, much walking he arrived at the Cave, went inside and (with some difficulty) climbed up onto the platform. Then he said, “O, Great Spirit, answer my question.”

“Speak and I shall answer,” said the Spirit who had not worked this much in a long time.

“What is the Name of the Tree that grows in the Valley?”

(Sigh) “The Name of the Tree is…Oowungalaymah!”

“Will you say it once more, please?”

“One more time, if you would be so kind.”

“Thank you,” said the Turtle, and he started to go.

“Wait,” said the Spirit. “Aren’t you going to say that it’s a stupid name for a tree?”

“You have traveled a long way,” she said. “Don’t you want to take a rest?”

But her son just said “Oowungalaymah, Oowungalaymah…” and marched straight to the Magical Tree. When they saw him coming, all the animals of the valley began to gather under the barren branches of the wondrous tree. Finally, at long last, Greg was standing before the Tree, and he took a deep breath and said, “Your name is…Ongo-lay-wah-moo!” But he knew that was wrong so he shut his eyes tight and concentrated as hard as he could and said “Oowungalaymah!” And no sooner had he said it than the branches of the Magical Tree began to bear fruit. Bottleneck the Giraffe took the first bite.

“It’s the most delicious fruit I ever ate! Way to go, Greg!”

And so it was that for the rest of their lives, the animals of the Valley ate the Oowungalaymah Fruit from the Oowungalaymah Tree and, despite the fact that they now had a big, long, hard-to-say word in their day-to-day vocabulary, lived quite happily ever after.


…And now, my friend…can YOU remember what was the name of that tree? 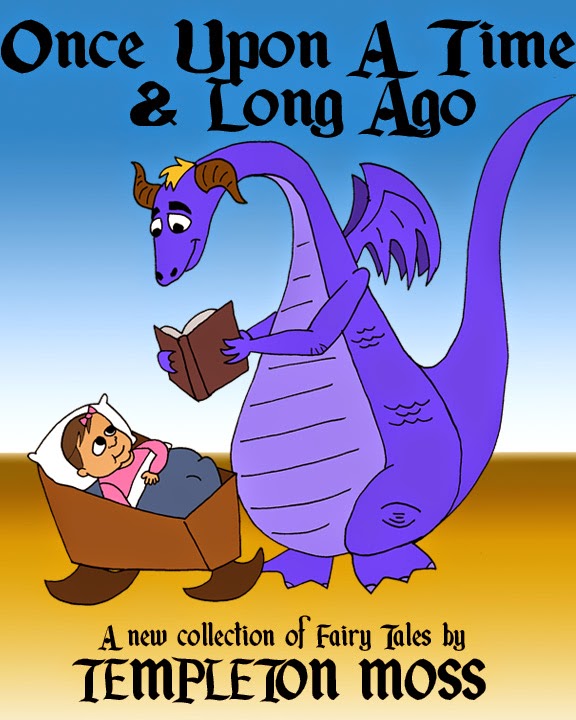 This is just one of the many enchanting fairy tales to be found in my book Once Upon a Time and Long Ago, available HERE for your Kindle or other portable device.
Posted by Templeton Moss at 10:43 PM

Email ThisBlogThis!Share to TwitterShare to FacebookShare to Pinterest
Labels: Bantu, fairy tale, Galleons Lap, Once Upon a Time and Long Ago, Oowungalaymah, Tale of the Name of the Tree, talking animals, Templeton Moss