THE DUCK WHO WOULD BE KING

King Leonidas was a mean, fierce lion. The sort of king people followed more out of fear than actual loyalty. It would not be exaggerating to call him a tyrant. Really, he was kind of a jerk. But the thing about kings is no matter how big a jerk they are, when they come to visit your village, you have to be super nice to them and act like you love them.

Such was the case when King Leonidas arrived in Duckville. The ducks who lived in Duckville went all out to impress their king when he stopped by on his annual inspection tour of his kingdom. There was a parade and a festival and they bowed and praised their king…though, again, this had more to do with the fact that lions love the taste of duck and less to do with any actual reverence they might’ve had for their ruler.

But things don’t get really interesting until Leonidas decided to sample the local delicacy. Every place in the world has some kind of foodstuff that they do better than anything else. In the case of Duckville, it was that time-honored gourmet dessert…soft-serve icy cream. But imagine the king’s surprise when he ordered one of those swirly cones and he heard:

“That’ll be three silver, your majesty.”

“Three silver?” said a shocked Leonidas. “May I remind you that I am your king?”

“May I remind you that I’m trying to run a business here and you gotta pay for your icy cream…sire?”

The king was not used to being spoken to that way. But, rather than start a panic by eating the duck and his icy cream, he decided simply to pay for it. Unfortunately, he hadn’t expected to need any money, so he hadn’t brought any.

“I got it!” said a duck from the crowd and out stepped Steve. Steve was a clever, hard-working industrious duck who had a very important job in the village. He designed and made tee shirts with funny pictures and clever sayings. Naturally, he had plenty of money, and was more than happy to lend the king three silver, with which the grateful monarch immediately bought his icy cream and gobbled it down.

“Delicious!” said the king. And, still under the influence of the tasty treat, turned to Steve and said, “Your generosity will not go unrewarded, fair duck. I will repay you, and soon!” Steve bowed gracefully to the king and Leonidas took off for the next stop on his tour.

Before embarking on this perilous quest, Steve did the usual things: He paid his bills, cancelled the milk, hired a house sitter, went to a Going Away And Hope You Don’t Get Messily Devoured Party and, the morning of his departure, he went to see the Duzard.

“Your quest is long and perilous like the last pickle in the jar!” said the Duzard for some reason. “You will need many supplies if you are to get your desire.”

“But I can’t carry supplies,” said Steve. “All I have is this pocket in the front of my tee shirt.”

“Yes, I see,” said the Duzard. “But I have a spell which will make that pocket bottomless!” So saying, she waved her wings through the air like they had fallen asleep and cried, “Wokka Doo Dokka Woo Quack…Quack…QUACK!!!” There was a bang and a puff of smoke in the vicinity of Steve’s “Life Quacks Me Up” shirt and his pocket was now immeasurably deep and could hold just about anything. To demonstrate this, the Duzard slipped a prize watermelon into the pocket just as easily as if it had been a grape.

“You will see. For the future is three tacos under a bridge!” On that indecipherable note, Steve left, confused but excited.

The journey to the king’s castle was uneventful for the most part. He encountered few obstacles and was making very good time. By and by, he came across a ladder leaning against a tree. No one seemed to be around so he thought he could use the ladder on his adventure. He slipped the ladder into his enchanted pocket and continued on his way.

A while later, he came upon his first big obstacle: A river. But, a fairly elegant solution suggested itself. He put the river in his pocket with the ladder and walked across the now dry riverbed.

Before long, he was in sight of the castle and he saw a beehive hanging in a tree. It occurred to him that this might also come in useful so he put it in his pocket with the river and the ladder.

Finally, he had arrived at the gates of the castle and he cried out, “King Leonidas! I have come for the money you owe me!” He shouted this at the castle several times, waiting for the king to come out. Instead, what happened was this: The guards came out, grabbed Steve by the collar of his tee shirt and threw him in the dungeon, which is what the king had told them to do.

The good news was that the bars on the windows of the dungeon were designed to keep out big, powerful animals like rhinos and tigers and things, not small ducks, which meant Steve could pass between the bars easily. The bad news was the window was thirty feet up. Now, ducks are fliers, but they’re not very good at flying straight up and there wasn’t room for a running start in the small dungeon. Luckily, Leonidas hadn’t counted on Steve having a magical pocket in his tee shirt, and he pulled out the ladder and used it to climb the wall and escape the dungeon.

“King Leonidas!” he called again when he reached the gates. “I have come for the money you owe me!” The irate king had no idea how this duck had escaped the dungeon, but this time he ordered his guards to deliver the duck to the royal chef who was to prepare the subversive for dinner. This too might’ve been the end of our web-footed hero, but once again his tee shirt came to the rescue. After being put in the oven and left to roast for a while, Steve took the river out of his pocket, and it extinguished the fire before returning to its home riverbed, much to the delight of the fish it had left behind.

“King Leonidas!” called Steve, but he got no further, because this time King Leonidas himself came outside to kill the duck once and for all. But, Steve had one more trick in his pocket and out came the beehive which he hurled directly at Leonidas’ head. Of course, having been confined to a magic pocket all this time made the bees pretty angry, and they took it out on the next person they saw after being released, which was, of course, the king! The last anybody saw of Leonidas he was running away for parts unknown with an angry swarm of bees right on his tail…literally…you know, cuz lions have tails…never mind.

And that’s how the reign of King Leonidas ended. People told and retold the story of Steve defeating the king. Children would sing songs like “Bad King Leonidas” or “Leonidas, Bad, Bad King” or “Hey, Remember That Guy Leonidas? What A Jerk HE Was!” As for Steve, he was elected the new king in a landslide, and he sat on the throne for many years, usually wearing a tee shirt that said “It’s Good To Be Da King!” The Duzard was appointed his Chief Advisor and she often bragged about being the first to call the king “Your majesty.” Thus began the greatest age of prosperity the kingdom had ever seen. And all thanks to Steve…The Duck Who Would Be King! 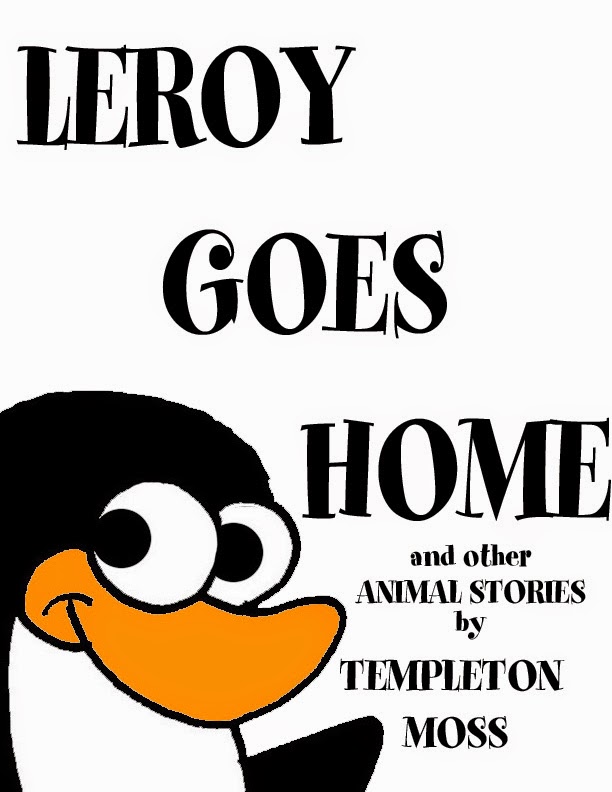 This is just one of the many delightful animal stories in my book, Leroy Goes Home. Buy your copy HERE and read it on your iPhone, Kindle, iPad, laptop, Surface, Android, Windows Phone...anything, pretty much.
Posted by Templeton Moss at 10:55 PM