SIR JIMMY AND THE HELPFUL RAT 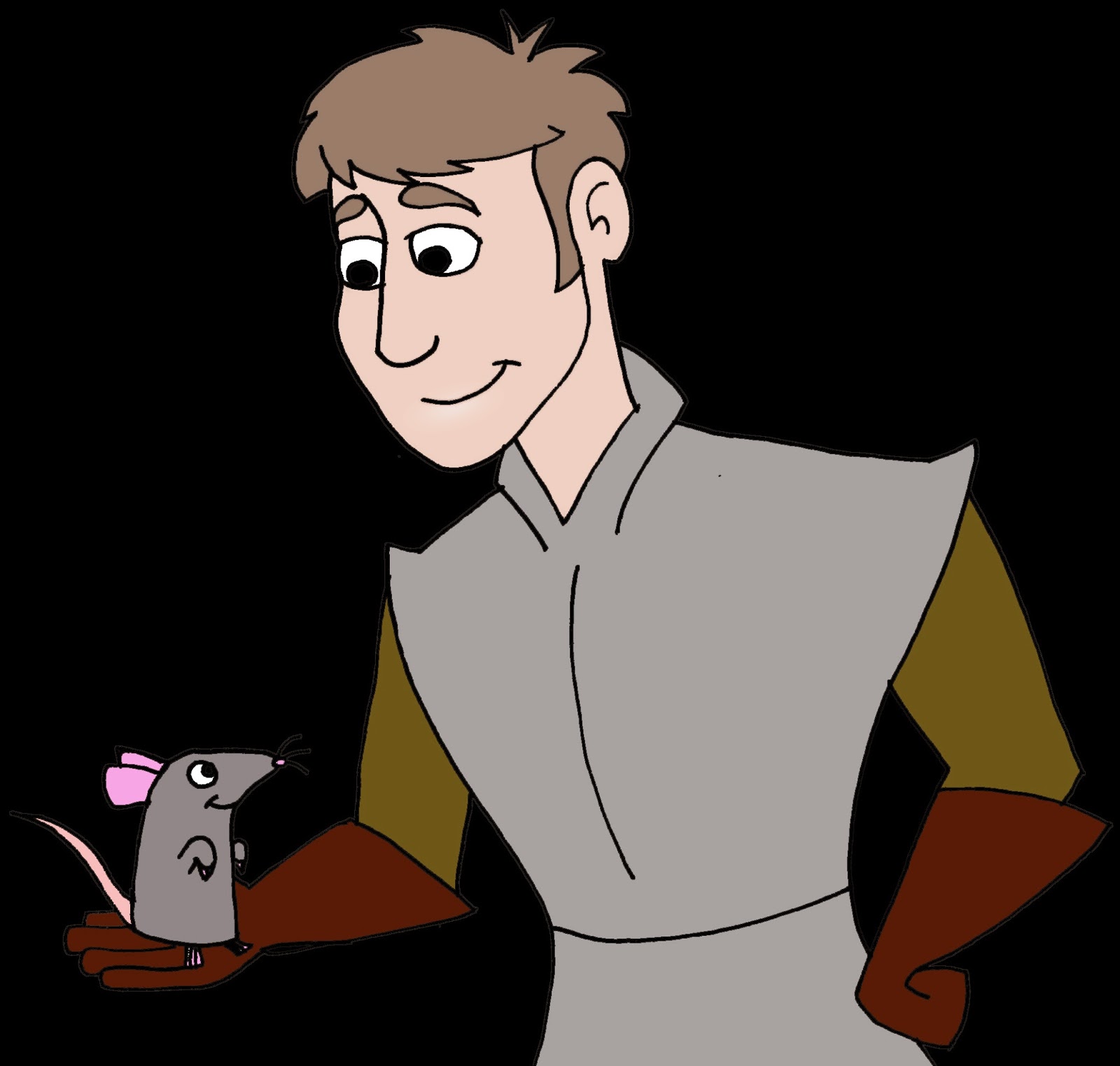 Once upon one of those times that happened really quite long ago, there was a little village called “Witchiburg.” The reason it was called Witchiburg was that it was populated entirely by witches. Some were old, some were young, some were tall, some were stout, some were ugly, some were pretty…okay, not that many were pretty, but some of the younger ones were…but, yeah, most of them were really, really ugly. But it was okay because they were all very nice people and some had black cats and some had flying broomsticks and some had cauldrons. And all the witches of Witchiburg lived quite happily for some time.

Then, one day, a beautiful princess came to town. Her clothes were ragged and she looked like she’d seen hard times. She cried to the witches that her entire kingdom was destroyed by a wicked dragon and she was all alone in the world. The witches took pity on her and they cleaned her up, and made her some new clothes (with magic) and even magically built a big castle for her to live in with lots of magical servants and things so that she could go on living in the manner to which she had become accustomed. The beautiful princess was very grateful…for about ten seconds. Because then she revealed that she was that rarest of creatures, an evil, beautiful princess! And she had tricked the witches into giving her everything so that she could rule over them with an iron, but satiny smooth-skinned, fist!

So began a terrible reign of beautiful evil and the poor witches were miserable.

Until the day, many-a-day later, when the knight came to town. He was not what you’d call a handsome knight. I mean, he wasn’t an ugly knight. He was sort of okay-looking. Maybe a bit better than average. Cute, I think is the word. And he rode into town on his trusty steed, Ricky, right up to a witch who was tending her garden (witch’s usually have gardens so they can grow their own herbs for potions) and said, “Hail, citizen!”

“I am a knight from a faraway kingdom. I have defeated villains and liberated peoples. I have faced wicked dragons and reformed them. Many is the bridge troll I have outwitted. I have thrice been called a hero by people who should know. But you may call me…Jimmy!”

“It’s an honor to meet you, Sir Jimmy. I am Helen, a humble witch.”

“Charmed. I am traveling the land in search of a beautiful princess to—”

“Princess? AAAAAAH!” With that, Helen ran screaming into her house and out of this story.

“What did I say?” asked a bewildered Sir Jimmy.

“You said ‘Princess.’ That word isn’t particularly popular ‘round these parts, stranger.” Sir Jimmy looked around for the source of the voice. “Down here!” Sir Jimmy looked at the ground around Ricky’s hooves, and saw a little gray rat looking back at him. “Yeah, it was me.”

“Yeah, pretty much. Wait a minute…” The rat climbed up Ricky’s leg and up, onto the back of his neck, facing Sir Jimmy. “There, now we can have a talk.”

“Why did that witch run away when I mentioned princesses?”

So the helpful rat told Sir Jimmy all about the evil princess who was persecuting the good witches. “Yeah, things are tough around here right now. What we really need is someone who’s thrice been called a hero.”

That was all it took. Sir Jimmy rode Ricky to the center of town and declared in a loud voice, “I, Sir Jimmy of Somewhere Very Far Away, will defeat the evil princess and set you nice witches free!” The witches cheered and clapped for Sir Jimmy. They even helped him with their magic…

Later that same day, a visitor arrived at the evil princess’s castle. It was an incredibly handsome knight who introduced himself as Sir James…seriously, this guy was hot. The evil princess was much in awe of his great beauty, and never dreamed that it was really just the kinda cute Sir Jimmy in a magical disguise provided by the good witches.

“All my life I have been in search of someone as beautiful as you…and here you are!”

“Sir James, you are as charming as you are rich and handsome. I mean handsome. Just handsome.”

Okay, it’s starting to look like the rest of this conversation is going to be nauseating and entirely useless from a plot standpoint, so we’ll skip to the part where they’re having a glass of wine. Princess Margaret poured wine into two goblets and set them on a tray which she carried into the parlor where Sir Jimmy was waiting. In his pocket was a small vial of potion the witches had given him. All he had to do was pour it into Margaret’s glass. But first he had to distract her. He had to come up with some brilliant, cunning plan to divert her attention away from—

“Where?” asked the princess, turning her head to look where Sir Jimmy had pointed. “I don’t see anything.”

“You tried to poison me!” she cried. “You really thought I’d fall for that ‘hey, what’s that thing’ trick? I am a powerful evil princess and you are no match for me. I don’t care how many magical tricks those old hags gave you. Now you’ll spend the rest of your life locked in my dungeon!”

As Sir Jimmy sat in his dingy cell, the spell the witches had put on his face wore off. “At least I look like me again,” he said. “Too bad nobody will ever see my face again.”

“Not necessarily!” came a familiar voice. Sir Jimmy looked up to the small, barred window and saw a familiar face. It was the helpful rat from that morning! He climbed down the wall and chewed through the ropes that were binding Sir Jimmy’s hands and feet. “There, you’re free! So, c’mon! Let’s go!”

“Wait,” said Sir Jimmy. “I gave my word that I would defeat this evil, beautiful princess and I can’t go back on that!” Sir Jimmy didn’t head for the exit, he ran upstairs to the princess’s bedroom and broke down the door. “Evil Princess Margaret!”

“How dare you speak to me in that way! I am a beautiful princess! And, by the way, you are way less hot than I thought you were.”

“Ya know what? I don’t care. I like my big nose and droopy eyes. I like that my ears stick out a little. I like that, no matter what I try, I can’t stop my hair from sticking up at the back. Some people call those things flaws but they’re the things that make me look like me. And I’d rather be goofy-looking and well-liked than beautiful, lonely and friendless like you.”

“What do you know about it? I’m a beautiful princess; everyone loves me!”

“You’re wrong, Maggie. Nobody likes you. The people of Witchiburg hate and fear you. They were better off before you came here. Not that it matters. You won’t be around much longer.”

“Why? Because you’re going to kill me?”

“I won’t have to. You’re empty, highness. You’re beautiful on the outside, but there’s nothing on the inside. All you are is a pretty face. And everyone knows that pretty faces don’t last.”

“What are you saying?” Margaret was starting to sound nervous now.

“Time, your worshipfulness. Time changes everything. You’re getting older. Your oh-so-perfect skin will sag. Your hair will turn gray. You’ll get crow’s-feet on your eyes and wrinkles on your face. Your body won’t be so tight and trim when you’re seventy-five. You’re, what, twenty-eight? Twenty-nine?”

Sir Jimmy went to her side and put a hand on her shoulder. “It’s not too late to change, Margaret,” he said with great kindness. “Sure, your youth won’t last forever, but inner beauty lasts long beyond youthful outer beauty. Be a better person. Change your ways. Make some friends. And you’ll be beautiful and loved for the rest of your life.”

Margaret sniffled and looked up at Jimmy. “Promise?”

And that is how Sir Jimmy of Wherever defeated the evil, beautiful princess and turned her into a nice, beautiful princess. She swore to change and, from that day on, ruled the witches of Witchiburg with compassion and mercy. She appointed Sir Jimmy the captain of her royal guard and, a few years later, they started dating. Meanwhile, the helpful rat became one of the court’s most trusted advisors and he soon married a rat he met in the kitchen and they had about twenty-three babies.

And all the witches of Witchiburg lived every so very much happily for ever and ever afterward!

If you like slightly unusual fairy stories like this one, you should read my book, Flunkerer's Fables, available HERE from the Amazon Kindle store.
Posted by Templeton Moss at 11:11 PM